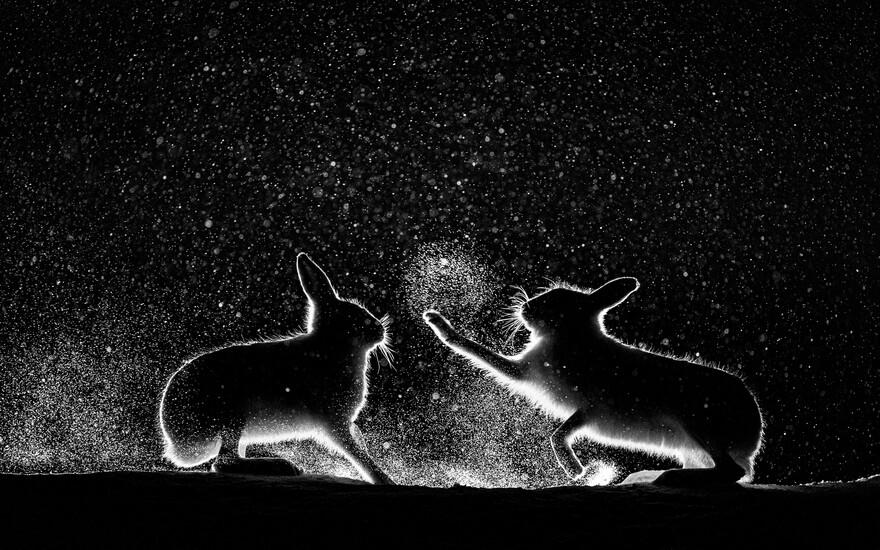 Wild hares are common in Norway, but they are challenging to photograph because they are shy and nocturnal. In this project, the hares are fed with oats, and after many years doing this, they regularly come - but only at night. This often happens in the spring, and when the mating season approaches, fights often occur between rival animals. Early in the winter, all individuals are completely white, and it is impossible to distinguish them. In the spring, they get grey fur, preferably with some spots, and then you can see the difference between them. The photography takes place from a hide. Artificial backlights have been set up which illuminate the outline of the animals and create an exciting effect. When they fight, they use their front paws just like in a boxing match. When such fights start, start shooting, you can get many thousands of pictures in one night! When such fights occur at the same time as heavy snowfall, the scene becomes perfect. The place is Rørosvidda, which is a low alpine area in south-eastern Norway.

The distance from the hide to the hares is about fifteen meters, so a zoom lens of 180-400mm is ideal. During shooting, I use a full aperture and a fast shutter speed of 1/1600 second. I underexpose the images with -1.7EV so that they remain dark. In terms of editing, there is little that needs to be done afterwards, since the backlight provides a good contrast. I still choose to convert to black and white because there are very few colours in the image anyway. I also think it is essential to include space around the animals. Space below is kept narrow, which means that the viewer's focus is directed towards the point of impact and then up into the snow and the air.