Selection of August 2019: Cheetah in Grassland by Anette Mossbacher 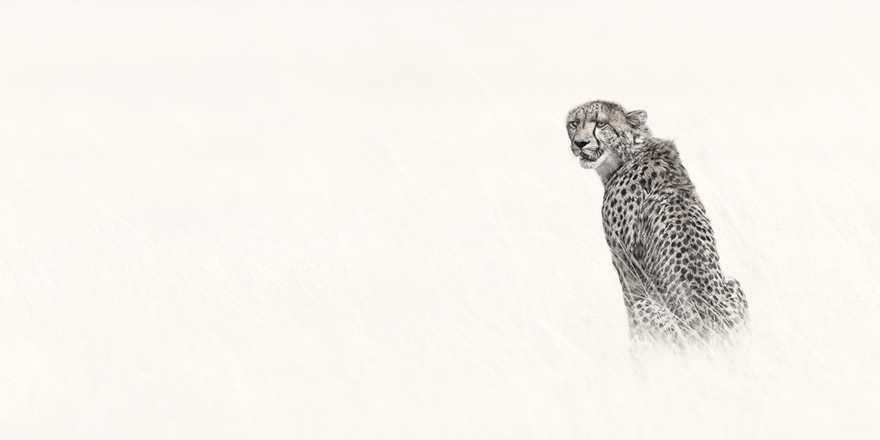 Cheetah in Grassland by Anette Mossbacher

This photograph was taken 2015 in Etosha National Park, Namibia. I found 3 cheetahs sneaking up on a herd of Springboks in high grassland. When cheetahs slowly sneaked up, one cheetah suddenly started to run after a Springbok as fast as she could. The cheetah sprinted for about 150-200m, but a Springbok was already alerted and also had the advantage of running in a zig zag. A Springbok luckily got away, as well the rest of the herd. After this the cheetah hunting a Springbok sat down in the high grass and gave its sibling this look. I had to smile, the look was like; geez guys, where were you when I needed your help, nothing will be served for dinner tonight!

As the cheetah was sitting in the high grass looking at Springboks running away, the animal only looked back at its siblings for about 5 seconds. The framing/composition for this photograph came more or less automatically to my head. Of course I was hoping that the cheetah would look back. I thought, if it looks back it will be over its left shoulder, as the siblings were on the left hand side. I was just hoping that it would look. It did, for about 5 seconds. When I am lucky to see such behaviour, I grab the opportunity and capture many images. I look for the most appealing one and usually the first, “automatic" one is the best. My regret about this photograph is that I could have placed my vehicle in a better position, while the cheetah was hunting Springbok. My thought was to move my jeep closer, but I was worried that Springboks might run away. I very much dislike to be in the way of an escape route of an animal being hunted. My thoughts on this are always: Fair for both sides, stay out of the way. The only thing I wished for, was that the grass have been lower.

When back from a trip, I very seldom look at any of my photographs within the first 2 -3 weeks. The whole trip needs to settle in my min. The photographs I like will end up in the special folder when uploaded on my RAID; I also backup pictures. For me to process photographs, I need to be in the mood and have "endless" time. This is usually in the evening - I switch on my music, not Pop music, I love to listen to film music. I also switch off my phone and internet to have peace and quiet. I start with a photograph I have in mind. When a song particularly suits the photograph, this song will be played over and over again, until I am happy with the photograph. Now for this particular photograph, since the high grass was yellow and the cheetah blends in too much, I had to do something to make the cheetah stand out. Reducing the yellow in the grass did quite a good job. Some home-made filters also helped with the colours of the cheetah. It is not a pure black & white photograph, I did not wanted it to be a B&W photograph. I wanted to have a bit of colour in this photograph. In my eyes, letting the cheetah pop out nearly in B&W and the grass slightly bright yellow is much more appealing than what I have seen in nature. In my opinion it fits better the situation that happened before - the hunt. The photograph is also overall smoother, more elegant and somehow portraits the hunt in the cheetah itself. This was on my mind while processing, this is how I see this photograph today and have imagined the photograph while I have processed it. By the way, this photograph was not done in 5 minutes nor in 1 hour, it took quite a while.