Selection of March 2022: Ready for Takeoff by Corry DeLaan 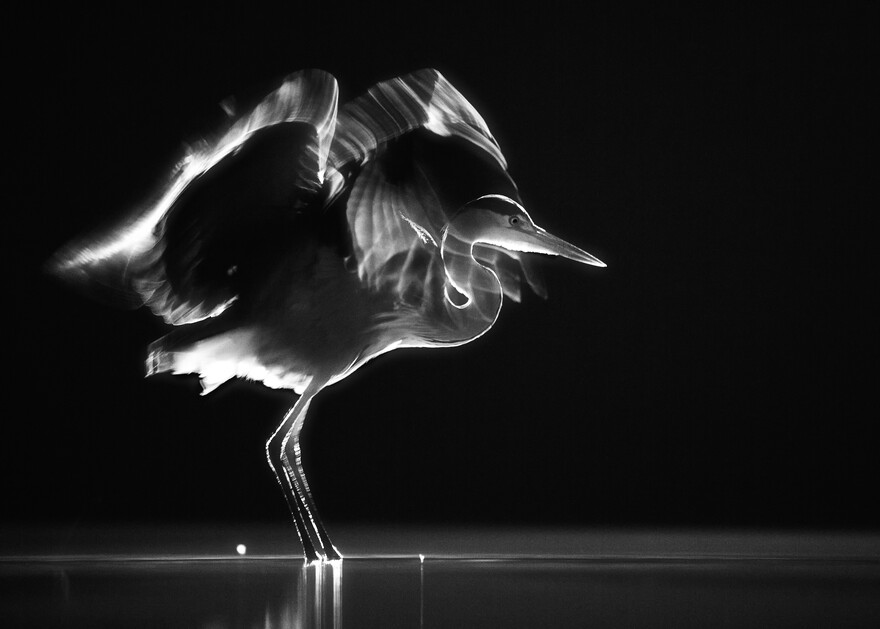 Ready for Takeoff by Corry DeLaan

Before I started my trip to Hungary, I had a vision: I wanted to depict the herons in artistic motion blur. I wanted to move away from the usual frozen, crisp photographs of the birds to a more artistic, aesthetic representation. Away from documentation and towards an art image. This photo was taken from a camouflage hiding place in Hungary (Puszta) in early February 2019 in the evening after sunset when it was completely dark. A constant backlight discreetly illuminated the shallow waters. Over several evenings and nights I sat here waiting for the gray herons. Sometimes I had to wait a long time until a heron appeared.

A short long exposure was to show the flapping of the herons' wings in motion blur. This was a difficult and lengthy endeavor because the light was constantly changing depending on where the heron was. So there was not one specific exposure time, but I had to change it constantly to achieve an effect like in this photo. It was especially difficult that on the one hand I wanted to show the motion blur in the wings, but at the same time I wanted parts of the bird to be sharp. If possible, this should be the eye. Over many hours and several days and nights, I watched the large birds as they moved. Slow, careful screaming movements, which did not bring the mirror-smooth water surface in unrest alternated with fast takeoff and landing movements or lightning-fast grabbing of a fish. To get the best shot of the herons I had to develop a feeling for them, to predict what their next movement would be, and with what exposure time I had to photograph them. Again and again I tried new exposure times.

Since it was very dark despite the spotlight, the high ISO of 1600 was necessary although the open aperture f/2.8 was used. Many hours and trials were necessary to get an image that met my ideas of composition and aesthetics. Finally, I managed to achieve my goal with the following settings: Canon EOS 5D Mark III, shutter Speed: 1/10 sec, f/2.8, ISO 1600, Focal Length 300 mm, Lens: Sigma 120-300 mm. Exposure Program: Manual, No Flash, No Strobe Return Detection, Metering Mode: Spot.

In digital post-processing, the first thing that was important to me was the conversion to a black and white image, which I accomplished with Silver Effex Pro from Nik. Then the contrasts were adjusted and the whole image was denoised with the Nik filter DFine. Finally, the crop was minimally corrected.