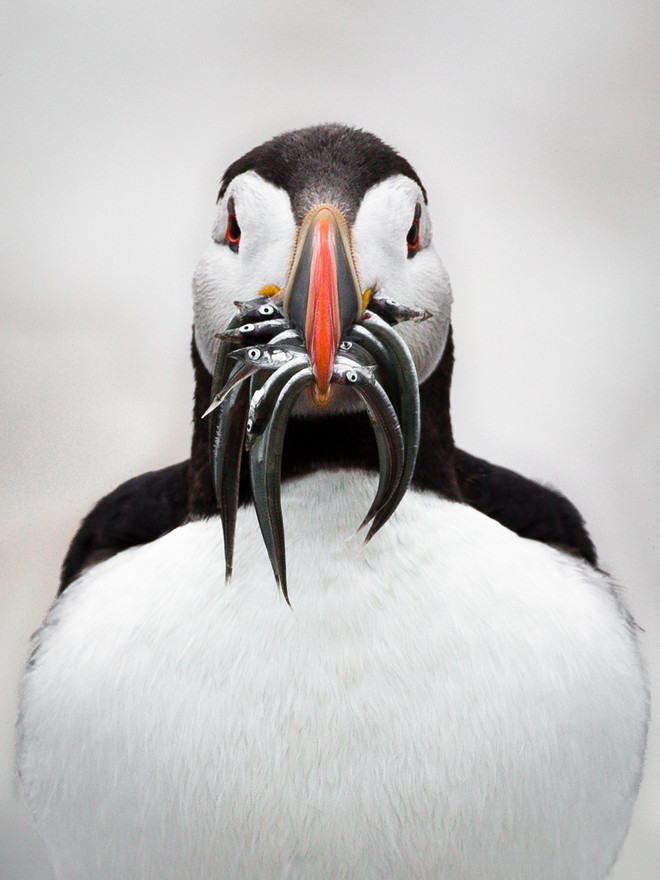 It took me several days on the Farne Islands before I could get used to the large number of birds, their great variety, the flight and habits, the behaviour of each species. My interest has grown for puffins during the feeding period. I wanted to report on these sad clowns while avoiding the "naturalistic" visual aspect.

On these islands the weather changes quickly. The sun was present during the first days of this trip, bringing many constraints because of the strong contrasts. I had to be patient and wait for a few clouds. I wanted to isolate individuals (photographically speaking!) in order to magnify them, to create portraits. The white background, if not glamorous, is 100% natural. It is indeed a rock covered with droppings. There are some darker mottles which are in fact less bleached edges. This background was essential to the successful completion of this photograph. The expectation of a clean face bird, offering almost symmetry was the second challenge. I only had one possible angle and the hours passed before the arrival of my model.

The photo had to be cropped in order to eliminate distructing elements and to simplify it as much as possible. The background is natural; most of the post processing here was elimination of a dominant violet / magenta on the black feathers. The micro contrast has been adjusted, as well as the black point. The colours are natural, the puffin beak being bright enough in this mating season.

I often wonder what could have happened to this wonderful bird when I return to that place or when I meet colonies elsewhere around the Atlantic ...