Selection of November 2021: Yin and Yang by Daniel Mirlea 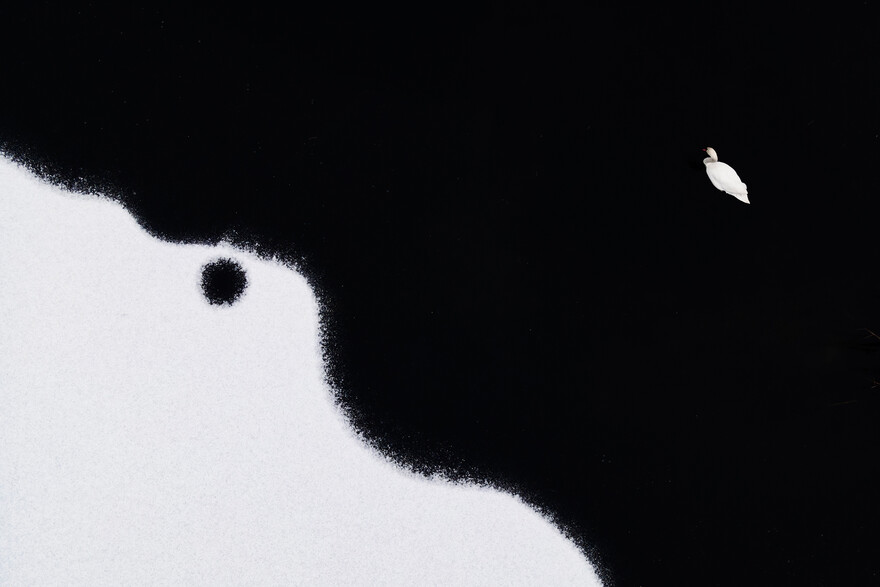 Yin and Yang by Daniel Mîrlea

"Sometimes you need to have some luck on your side to make a good photograph. I went to this place near my home many times; it is a wetland where the wildlife is thriving with a lot of potential for photography. I hoped for snow for a couple of weeks, and I didn't have any luck. We had so little snow in the area in the latest years, that I was sure I would not photograph any landscape/wildlife with a snowy background.

It was a cold day around mid-February, a day I didn't plan to go out. I was asleep when my dog started to jump on the bed and bark at me; my wife woke up and said: "Wake up, it is snowing outside." In just a heartbeat, I was up, I took my equipment, and I was in the wetland area in a couple of minutes. I can say that I'm lucky enough to have nature in my ‘backyard’. Once I got there, most of the ponds were almost frozen, with just a few openings on the water's surface due to the continuous movement of the birds. I tried to photograph the swan and other birds with my camera, but I didn't make anything special as the snow was too bright.

So, I decided to pick up the drone and try aerial photography. When I saw the drone's perspective, I realized how well the swans fit in the landscape and create a nice contrast. In the beginning, the swan wasn't too close to the snowy surface, so I made my composition and waited for the swan to come into the frame. I was pretty lucky that it wasn't disturbed by the drone, and it entered into the frame. My only regret is that I didn’t have enough time as I had to go back home to solve some stuff. In less than two hours, when I came back, all the snow and ice melted which is a shame as I wanted to give it another try, a composition when the swan has her wings wide open.

The post-processing of this photo it's pretty minimal. Mostly I worked on black and shadows for the water's surface combined with white and highlights for the swan and snowy surfaced. This kind of scenario didn't need too much attention, and I wanted to keep it as natural as possible (like in the moment I saw it)."