Selection of September 2020: Circle of Life by Ellen Cuylaerts 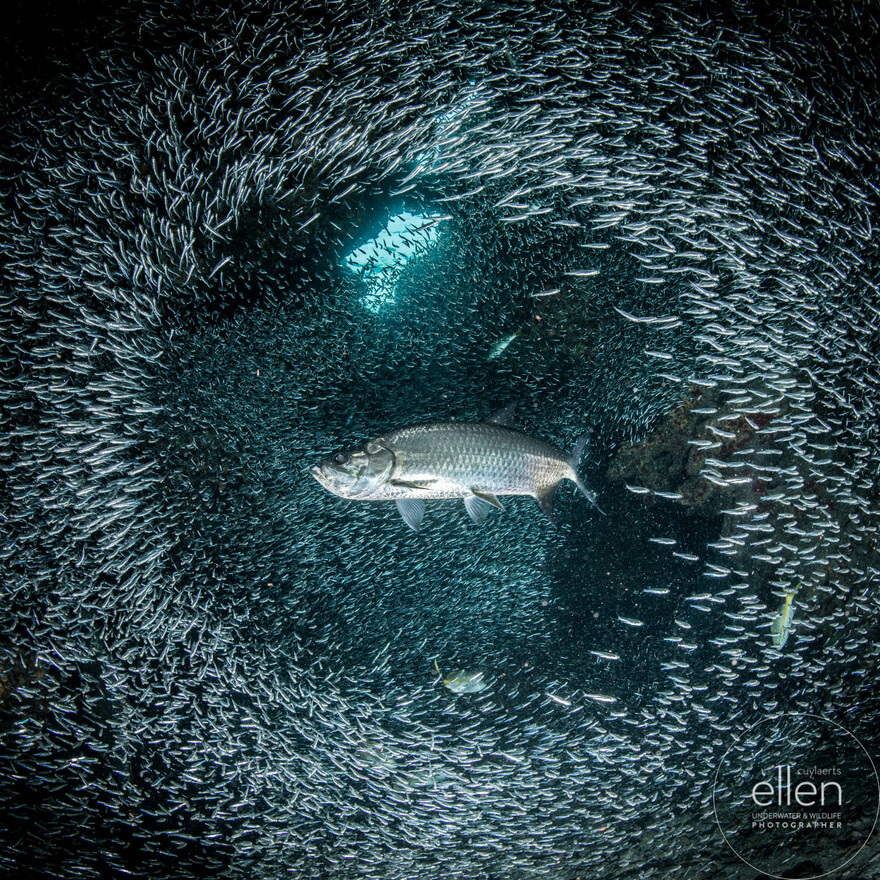 Circle of Life by Ellen Cuylaerts

The image ‘Circle of life’ was taken at a familiar dive site: Eden Rock, Grand Cayman, Cayman Islands, the island I called home for 12 years. Close to shore in the harbour are a few underwater areas where the shallow coral heads form a cliff towards a sandy bottom at around 15 meters. Grottoes and chimneys are accessible in between and year round the presence of predators like tarpon and black jacks are a promise of the arrival of silversides: big schools of small silvery fish which move in unison and proof that strength is in numbers and working together. Normally they arrive every summer but recent years the schools are harder to find and on this occasion the pack of fishes was thin, but it was still worth going out there with a camera and trying to capture the experience. I wanted to capture the moment the silversides evade the tarpon predator and tried to do so in showing this solitary big tarpon and the abundance of little silversides moving as one. It took me a few dives since at this point the pack never was thick enough to form a nice frame, but persistence pays off!

I have many shots of tarpon and silversides in my portfolio from years back in different locations, but this one was the hardest to take just because of the dwindling numbers. Due to the composition and the circle this patch of silversides formed, I choose a square as ratio. Since I shot raw and with strobes, I did not need to white balance, but added a bit of texture, reduced the highlights, added whites and vignetted at the edges. That’s it. Sometimes I desaturate the colors to add to the underwater mood, in this case that was not needed as the silvery colours of the subjects and the darkness of the grottoes, contributed to that effect. I try to get the shot right in camera and spend a long time working with the same subject whenever that is possible (not in a case like this photograph, wildlife images are captured in a moment, the key is to be prepared and choose your shutter speed depending on the subject and ISO depending on visibility and depth and …darkness.