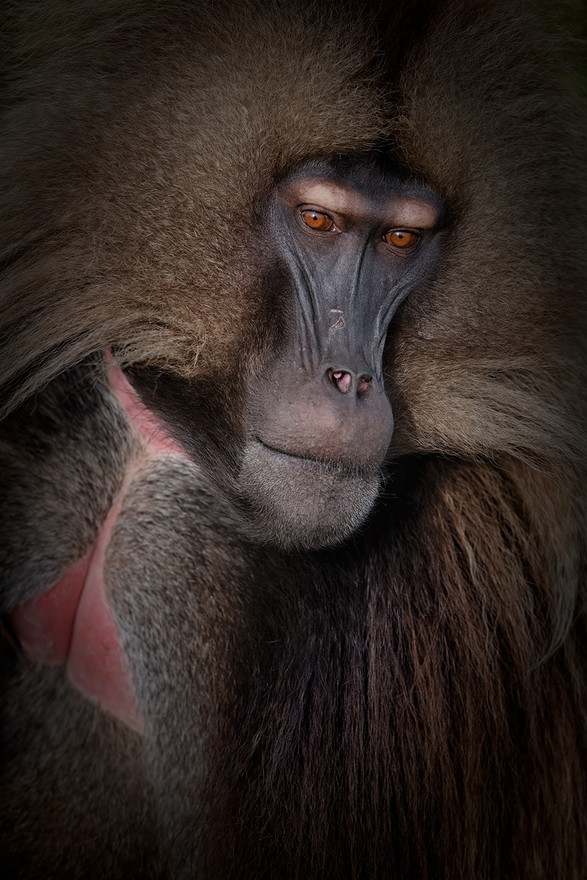 I took this shot in the Simien Mountains National Park, a gem of the nature located in Northern Ethiopia. The Simiens are beautiful high mountains that reach 3.600 meters above sea level and offer spectacular views over deep gorges and escarpments, with steep cliffs and highlands meadows. They are the natural habitat of the endemic Gelada monkeys, the most terrestrial primates, except for humans. Known as Gelada baboons because of their size (similar to baboons), they are also called "bleeding heart" monkeys due to the furless center of the chest. These monkeys usually go up the slopes in the morning, to look for food on high altitude meadows, and then come down again at sunset, to sleep in the ravines, sheltered from predators. I traveled to Ethiopia in September 2018 with two dear friends of mine; our goal was to photograph the monkeys on the edge of the escarpments, to have their portraits set in their beautiful natural environment. Every morning, for about a week, we were on the edge before sunrise, to wait for the monkeys going up. They are quite accustomed to humans, so they didn't get scared with our presence. We were told by the guides they don't like to be looked straight into the eyes, as they consider this an act of defiance and could consequently attack… they have big, pointed canines...

That morning, after the sunrise shooting, when the light had become harsh, I noticed this beautiful male, surrounded by two females. One of them was grooming him and he couldn't move easily (these monkeys love morning toilette). Immediately I set up the camera with 70-200 mm zoom lens. I crouched in front of him and waited for him to raise his head. They usually don't do this, but fortunately he looked straight into the camera and I was ready to take a few shots before he moved away.

I have processed the RAW file using Adobe Camera Raw, adjusting some basic parameters (contrast, lights and shadows, blacks and whites, clarity), before opening the image in Photoshop CC2020. To warm up the image, I used detail extractor. I also slightly lightened the center and darkened the borders to enhance the snout. Finally, I cropped the image a little bit to have in the frame only the monkey's figure, excluding the grass in the backdrop, and then applied a vignette.