Selection of January 2022: Reindeer under the snow by Grégory POL 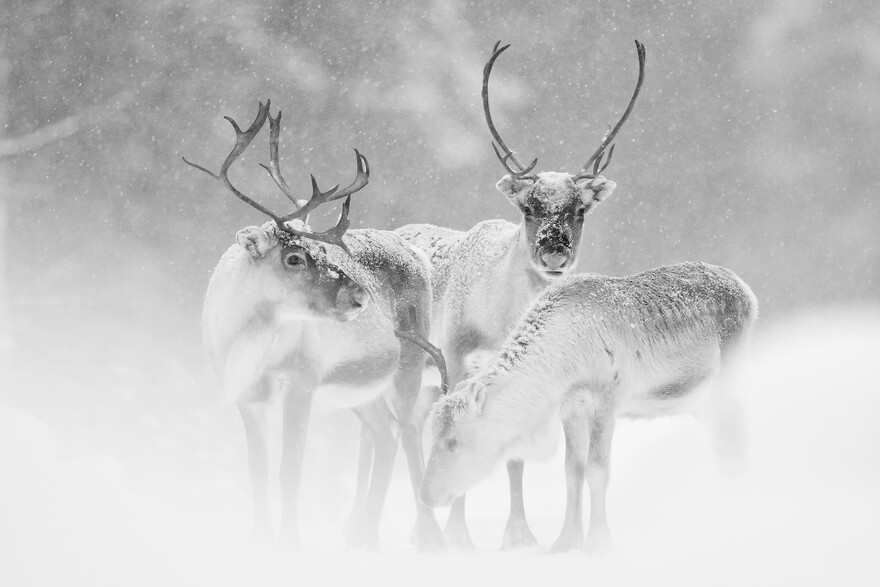 Reindeer under the snow by Grégory POL

People have said that wolves may have attacked domestic reindeer near a farm in Lapland. I looked for wolf tracks for a few days but I couldn't find any at the "attack" location. I then had fun photographing these domestic reindeer roaming freely near the farms.

It was winter at the beginning of the afternoon. As I was in Northern Finland in December there wasn't much light. It was snowing a lot. I found these three "domestic" reindeer on a road. I wanted to photograph them as I do with wild animals. I put myself in a ditch and I shot them like that.

My photographs are initially in color. I chose to transform them into black and white. At post-processing I remove details from my photograph because I want to print it on art photo paper which has a lot of grain. This gives a particular result that I really like. (It's totally different from a photo on a computer screen).

My exhibition called « Nord et Blanc » (North and White) aims to show animals in a pure snowy atmosphere and presentation through an artistic and naturalistic vision shows that nature is beautiful but also in danger. For three winters, I travelled over the moors and hills of Saint Pierre et Miquelon archipelago, Newfoundland, Greenland and Finland to try to approach animals in the snow. These hours of exploration and waiting, often resultless, allowed me to scout them.